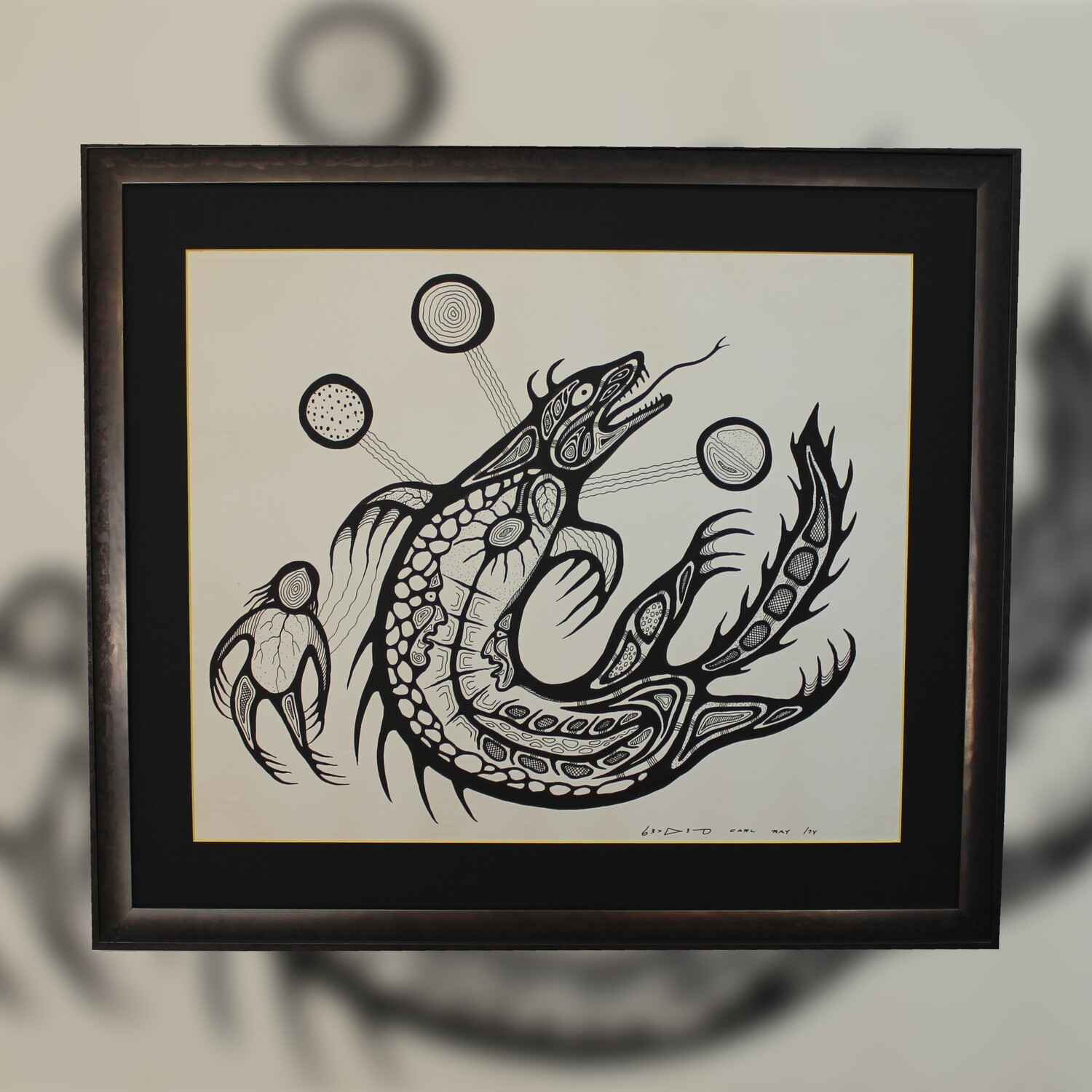 Original Acrylic and ink on paper,

Founding member of the “Indigenous Group of Seven”.

Signed in both Syllabics and Roman

Original acrylic and ink on paper, mounted to acid-free foam.

Carl Ray was born on Sandy Lake First Nation in northern Ontario in 1943. After leaving a residential school in McIntosh at age 15 when his father died, Ray worked as a trapper, logger and goldminer to make his living. Although he has been described as a self-taught painter, early career, Carl Ray became friend and apprentice to Ojibwe artist Norval Morrisseau, often credited as the creator of the Woodlands Stlye of art.

Carl Ray was one of the first Cree painters in Canada to reject traditional bans against depicting sacred Indigenous legends. He frequently painted dynamic relations between humans, animals and legendary creatures In his early career, Carl Ray worked with Norval Morrisseau on a large mural in the Indians of Canada Pavilion at Expo ’67 that Morrisseau had been commissioned to paint. Morrisseau designed and sketched the mural, Earth Mother With Her Children, and Ray completed the later painting stages of the artwork.

The Professional Native Indian Artists Inc. (PNIAI) was one of the first independently organized, self-managed Indigenous artists’ collectives and cultural advocacy groups in Canada. The PNIAI initiated an era of increasing activism and empowerment for artists and cultural workers of Indigenous ancestry across the country. Often referred to as the “Indigenous Group of Seven”.

The founding members of Professional Native Indian Artists Inc., (P.N.I.A.I.),were Jackson Beardy, Eddy Cobiness, Alex Janvier, Norval Morrisseau, Daphne Odjig, Carl Ray and Joseph Sanchez. The group started with a small circle of artists who were dissatisfied and frustrated at the lack of exhibition opportunities for Indigenous art within the contemporary gallery system.