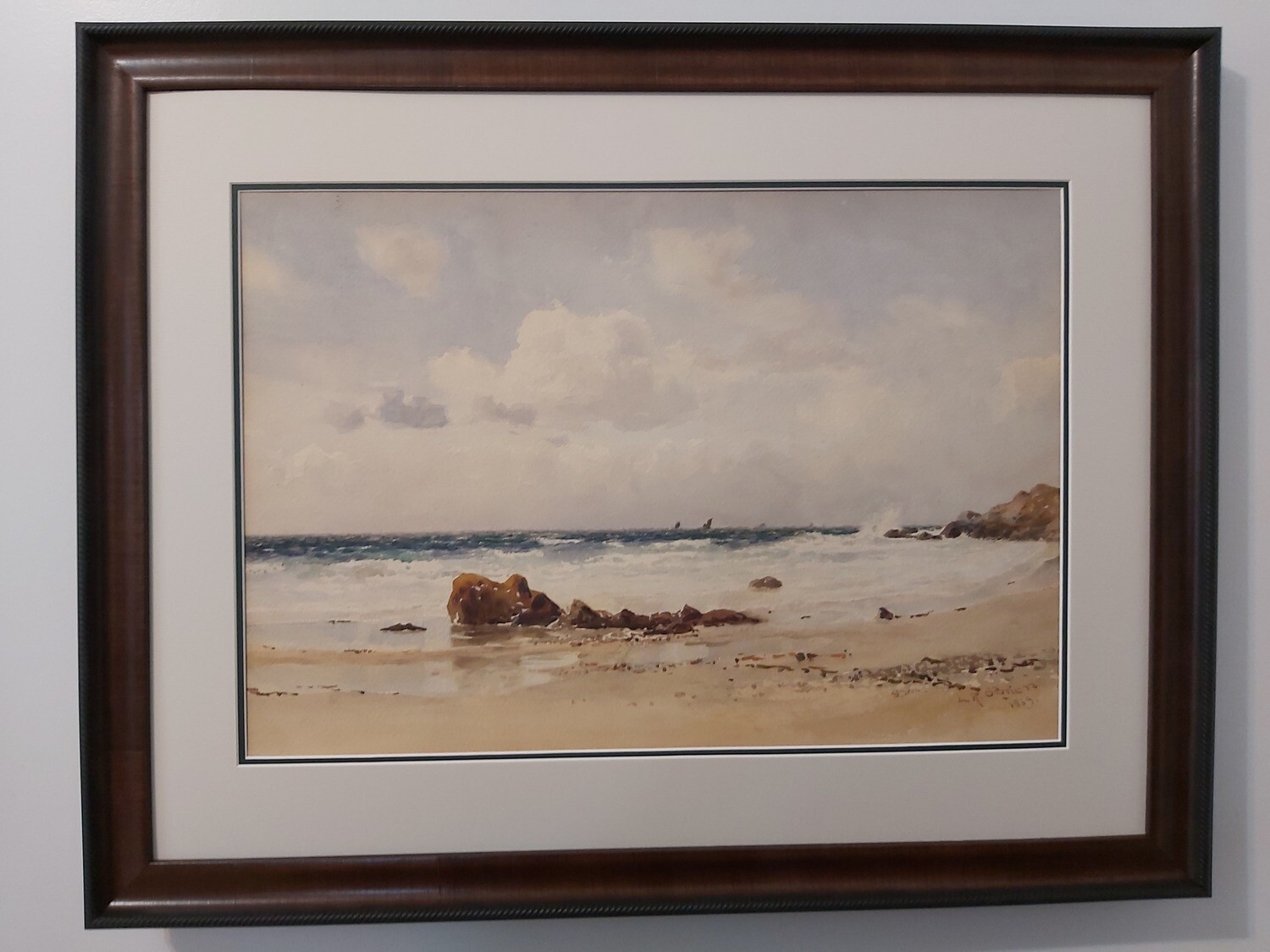 Painted in 1889, this original watercolour on board measuring 21 x 15 inches, 28 x 22 including the conservation framing. The framing is included in the price.

Lucius Richard O'Brien was a very a prominent Canadian painter, graphic artist, illustrator and educator. He was a founder and President of the Royal Canadian Academy of Arts; a founder of the Ontario School of Art; and one of the first artists to travel the breadth of Canada. His paintings depict the country's scenery from Grand Manan Island, New Brunswick to Vancouver Island, British Columbia; and, they are among the first pieces collected by the National Gallery of Canada,130 years ago.
Born in Shanty Bay, Ontario (on Lake Simcoe, 15 miles south of Orilla, and 50 miles north of Toronto), he died in Toronto where he had lived since about 1870.
Most of his works are watercolors; however, he did paint in oils in the late 1870s and early 1880s; and, early in his career (1840s and 1850s), he did satirical drawings which were made into wood engravings for illustrations. The subjects of his mature work include portraits, genre (Indians, frontier life), allegory and still life; but, the vast majority of his paintings are landscapes of Canada.

Quote: "…Canadian artists should help to represent Canada by such portrayal as they can give of the picturesque aspects of her scenery & life… Pictures and drawings of Canadian life and scenery… would materially help to make the country known and understood." - Lucius R. O'Brien.

His career as an educator is highlighted by the founding of the Ontario School of Art in 1876 , while he was Vice-President of the Ontario Society of Artists, under whose auspices the school operated until 1881. He taught watercolor painting, there, and served on the school's management council until 1883.


As a leader in the art community, he played a senior role in the establishment of two of Canada's oldest and most venerated art institutions: the Ontario Society of Artists* (1872) of which he served as Vice-President (1874 - 1880); and the Royal Canadian Academy of Arts (1880) of which he served as its first President (1880 - 1890). He is also considered a member of the informal group known as the Railway Painters and the founder of the short lived Palette Club, which exhibited in 1893 and 1894.

In 1990 the Art Gallery of Ontario had the first major retrospective of his work, "Lucius R. O'Brien: Visions of Victorian Canada".

Also, two of his works have been in the British Royal Collection, currently, that of HM Queen Elizabeth II, since 1881.