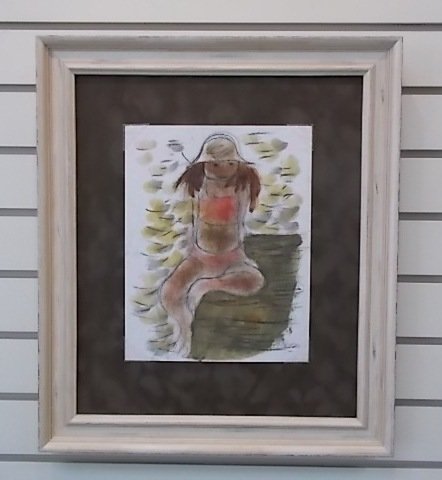 This is an original William Winter watercolour and pastel on paper, measuring 9 x 11 inches. The outside of the frame measures 16 x 19 inches. This piece was custom framed in all archival materials.

William Winter was born in Winnipeg 1906 studying art under Frank H Johnson and Lionel LeMaine Fitzgerald, both members of the Group of Seven, at the Winnipeg School of Art from 1923-1929.From 1930-1935 he continued studying art and did commercial art at Brigden’s in .He moved to in 1937 and established an advertising firm with Lesley Wookey and Jack Bush where Winter painted cover illustrations for “New World Illustrated” after establishing the advertising firm of Wookie, Winter,Bush in .

By 1948 Winter’s work was being praised in shows as having rich , jewel like colours and being a“ timeless psychological study ” of youth.

By 1960 he was involved in many commissions for industry as well as aid societies.He said of his subject matter in 1967 “I paint with a great deal of nostalgia. I paint my own boyhood” Winters paintings were appreciated for their sensitive depiction of the attitudes and habits of children and youth in lively colourful works.