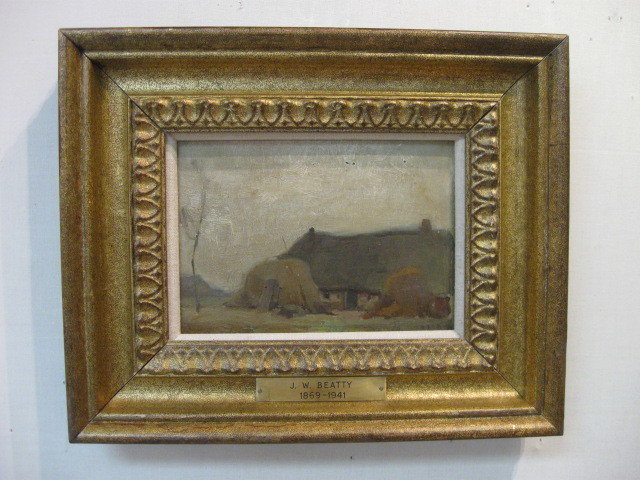 This is one of my favourite pieces, original oil on board measuring 7 x 5 inches, 11 x 9 inches outside the frame, there is a date on it, looks like 1907?

-J.W. Beatty had early associations with the Group of Seven during a crucial time in Canadian Art History. In 1909 he traveled with Lawren Harris to Haliburton, likely the earliest Northern sketching trip by a Group of Seven Member. He had sketching trips with J.E.H. MacDonald, Arthur Lismer, A.Y. Jackson, and even taught A.J. Casson.

-Starting in 1912, he made regular trips with his friend, Tom Thomson. Beatty is considered an early influence on Thomson, and both had space at the famed Studio Building. He erected the memorial cairn to Tom Thomson at Canoe Lake in 1917.

-Born in Toronto, Beatty served as a teenager with the Military in the Northwest Rebellion, and was well known for his fiery and impetuous character. He then worked with the newly formed professional Toronto Fire Department, while still studying and working on his painting. When he saved enough money, he traveled to Paris with his wife, there he studied at the Academie Julian.

-He made multiple trips to Europe where he produced dark and moody paintings, influenced by what was happening in Europe at the time. When he returned home to Toronto, he became excited by the raw Canadian wilderness, and his palette brightened, and filled with more light. He was part of the rise of Canadian Nationalist pride in uniquely Canadian landscapes.

-J.W. Beatty was appointed an official war artist in 1917, and traveled to the front lines in France.

-In 1901 he was elected to the Ontario Society of Artists. In 1903, he became an associate in the Royal Canadian Academy, then a full member in 1913. In 1904 he was a founding member of The Graphics Art Club. A member of the Arts and Letters Club, and served as it’s President in 1912.

-Beatty taught at the Ontario School of Art, serving as Principal from 1921 to 1941.

-He exhibited regularly and his works were and are widely collected by prominent private and public galleries, both Canadian and Internationally. There are 12 works by J.W. Beatty in our National Gallery.