Drawn to ships and the sea because of the timeless nature of its mystery and beauty, J. Franklin Wright has developed the mastery of the marine composition at its compelling best. Specializing in ship portraits, he is influential for his explorations into the sparsely documented history of Canada’s shipbuilding industry. 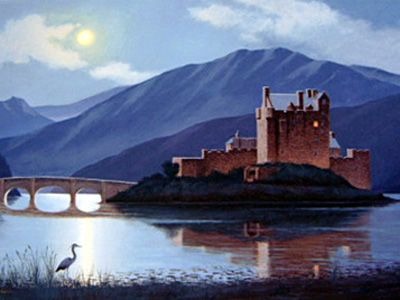 This depiction of the historic Eileen Donan Castle in Loch Duich; with the Five Sisters of Kintail mountains in the background, has a strategic advantage for it converges with Loch Long and Loch Alsh to the south of Skye. This was home to St. Donnan in the seventh century. The structure was badly damaged numerous times over the centuries and was given by Robert The Bruce to the clan MacKenzie who in turn gave it to the MacRaes, who were the foot soldiers of It was destroyed on May 10, 1719, by the English during a Jacobite uprising and lay in ruins for over 200 years. Restoration to the castle began in the early 1900’s, including the use of Douglas Fir timbers, donated by the MacRae clan on the west coast of British Columbia, Canada. The property is owned by the Conchra Charitable Trust, under the control of the MacRaes. The grounds and portions of the castle are open to public. Mr. Wright visited the area in the early 1990’s and it was an image he felt compelled to capture on canvas. He states that the style he used in this painting is considered “magic realism”.

Drawn to ships and the sea because of the timeless nature of its mystery and beauty, J. Franklin Wright has developed the mastery of the marine composition at its compelling best. Specializing in ship portraits, he is influential for his explorations into the sparsely documented history of Canada’s shipbuilding industry.

A native of Cape Breton, Nova Scotia, Wright is strongly influenced by his environment. With a style that captures a fleeting moment in time, “a characteristic feature of Wright’s work is the production of clear and accurate draughtsmanship. The coloring is natural and luminous and the depiction of his subjects in bright weather discloses as much as possible about the vessel and its details, both on board and in its surroundings”. (Poulson, The Northern Mariner, CNRS, Memorial University, January 1992, p. 101) Many of Mr. Wright’s paintings have been made into limited edition prints.

Evidence of his popularity is reflected by an increasing number of “sold out” prints. His editions have received medals of distinction. “Wright, one of the most sought after artists in Canada continues to become more popular with each painting and edition released.” (Canada Today, Canadian High Commission, London, June 1991, p.12) J. Franklin Wright, whose work has been shown extensively throughout Canada, has exhibited internationally at the Annual Mystic Invitational, Mystic, Conn.; the Jacob Javitz Centre, New York, New York; the Royal Society of Marine Artists London, England; the Royal Institute of Oil Painters, London, England.

He is a member of the International Society of Marine Painters in Florida. Wright is the only Canadian included in the influential marine volume, 20th Century British Marine Painting by Denys Brook-Hart. A book featuring the mastery of Wright’s work and titled The Marine Art of J. Franklin Wright features many of the historic vessels that have earned Franklin Wright international acclaim. Down to Earth Art are proud to be the exclusive dealer of originals and new prints for internationally renown marine artist J. Franklin Wright.